Home  »  Opinion Pieces   »   PlayStation Plus makes me want to ragequit 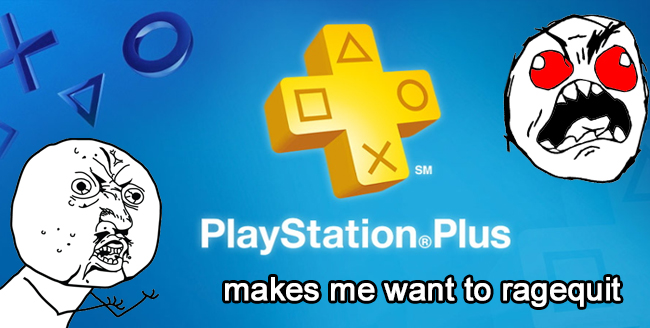 With a controller in my hand, I sat down to give PlayStation Plus another go. I’d had it for a few months a while ago, before making another transAtlantic move, and I was looking forward to getting back into some console gaming. I was already getting excited for the instant library of new games that I was about to get, certain that at least a few of the games on offer in the PlayStation Store would tickle my fancy, especially if they came free with the Playstation Plus option! Little did I know what awaited me…

After booting up the PS3, updating, and (finally) loading the store, I went directly to the PlayStation Plus option. Only two games were displayed on the screen, neither of which seemed really worth playing to me, so I continued to scroll along in the menu, hoping to find something worthwhile that would convince me to spend the $50 a year-long subscription would cost. However, I couldn’t find the games list that I knew must be somewhere. 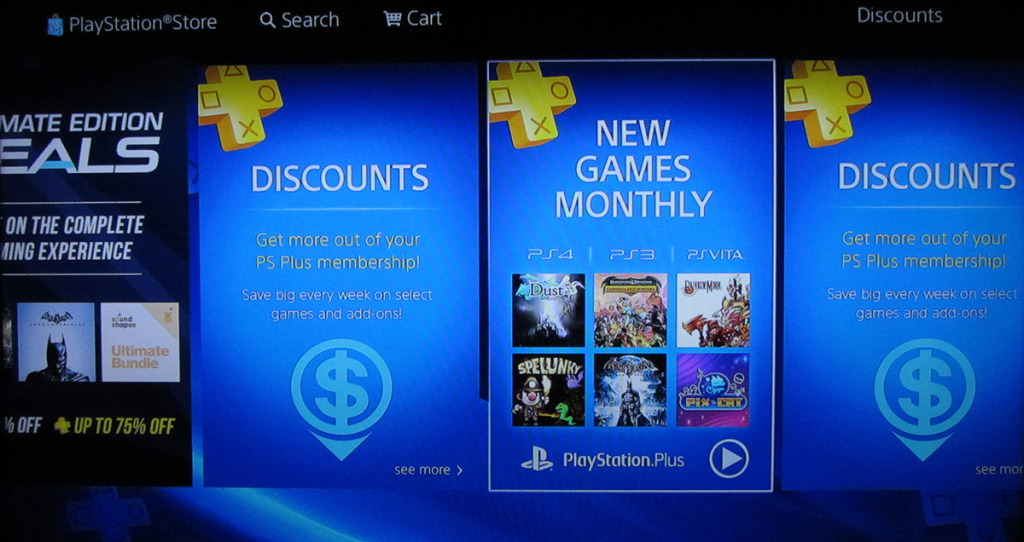 Every time I selected the PlayStation Plus games, I would get sent to the purchase screen for the various deals (one month, 3 months, 12 months), but there were no games in sight. While I’m sure this is a conversion boosting strategy that’s meant to make it as easy as possible for the user to buy, it’s an incredibly annoying way to try to found out what you’re even paying for. 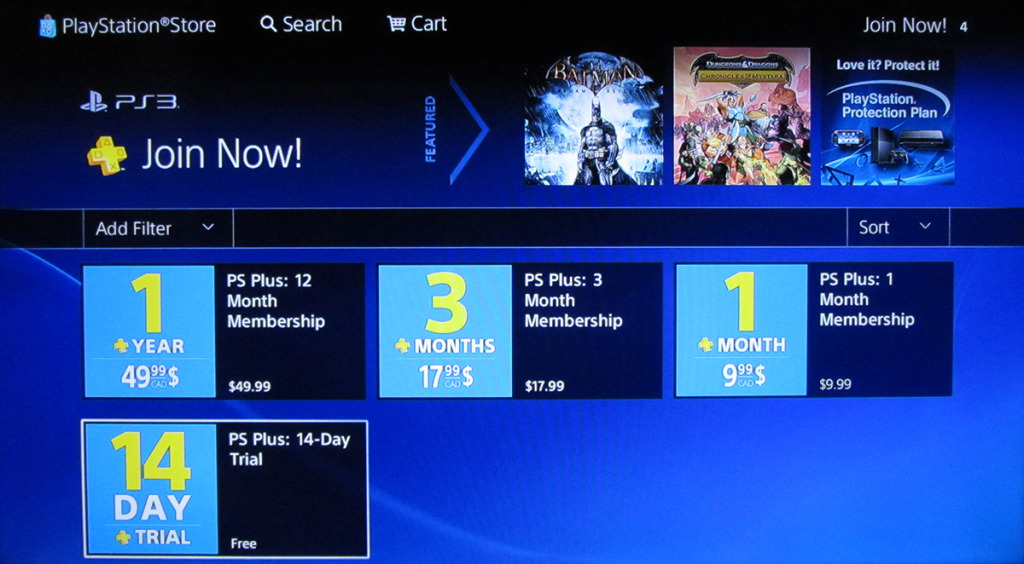 Just kidding, all you get to see here are the subscription plans but not a single game.

I then found somewhat of a semblance of a games library through the “Discounts” tab, which only ended up increasing the annoyance level. While there were some games on this screen, the majority of stuff that was displayed was entirely irrelevant to what I was looking for. The list was full of avatars, bundles, and other crap. The rage level began to rise as I threw my credit card across the room.

I find it very difficult to believe that after years of having a PlayStation account and using it on a pretty regular basis, PlayStation isn’t aware enough of the fact that I’ve never ordered a game for a PSVita, nor do I own a PS4. 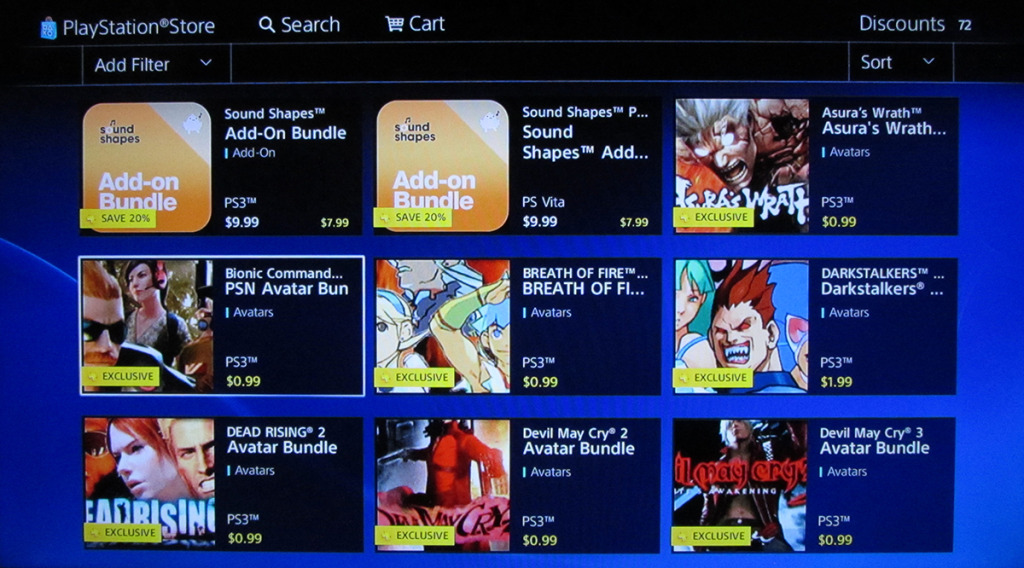 Where are the games Sony? Rename your console to AvatarStation.

And yes, I’m fully aware that there are filters that you can apply to the results displayed, but the most basic of filters, the one that says GAMES, is somehow missing from the whole scenario (although the “game types” filter did proudly display a whopping 2 full games available for PS3). The fact that I still have to scroll through a list of avatars and add-ons that I’m surprised anyone even spends their money on makes me want to throw the whole console out the window immediately.

Then I moved onto the “Exclusives”, hoping that I would finally see some games that I could play, only to be drowned in endless scrolling through “Timed Trials”. This basically boils down to you needing to go through the hassle of downloading and installing the game (heaven forbid you don’t have enough space on your harddrive for it and you have to spend even more time trying to figure out what to delete), only to be able to play it for up to 60 minutes (whoop-de-freakin’-doo!). Ragequit in T-60 seconds at this point… 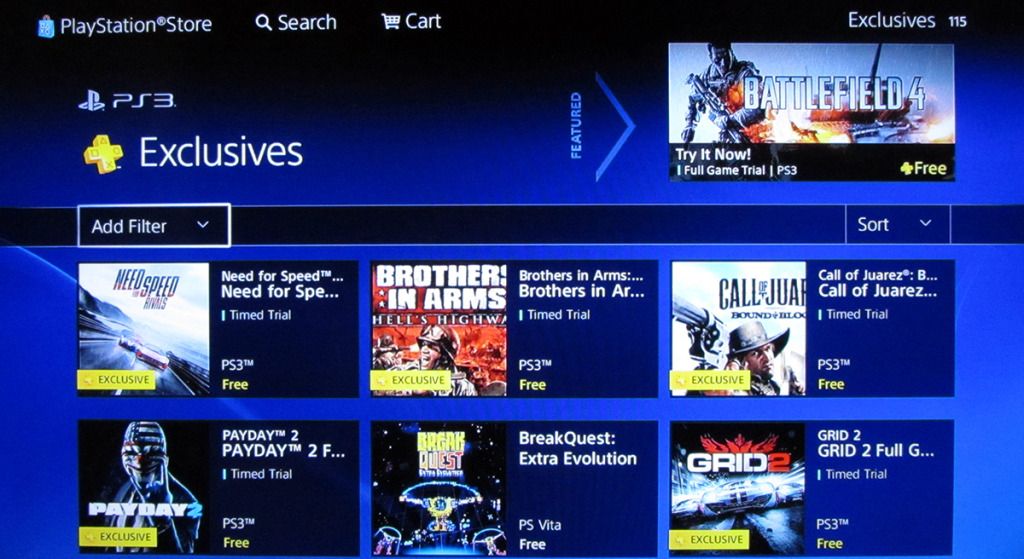 Games you can try for 60 minutes, no thanks. The downloading and installing process is just too painful for the 60 minutes of gameplay.

Then I mustered up the courage to look at “Join Now” and tried to click on what looked like a video of how PlayStation Plus will allow me to “Experience more together”. Well, disappointed once more, I didn’t get to see a video, but I did get to the Free Games page which had a total of 8 games to show, 5 of which were the same, just differing on platforms.

This unnecessarily difficult charade made the search for what I actually get by purchasing PlayStation Plus just as much of a mystery as before I wasted 30 minutes of my life trying to solve it. 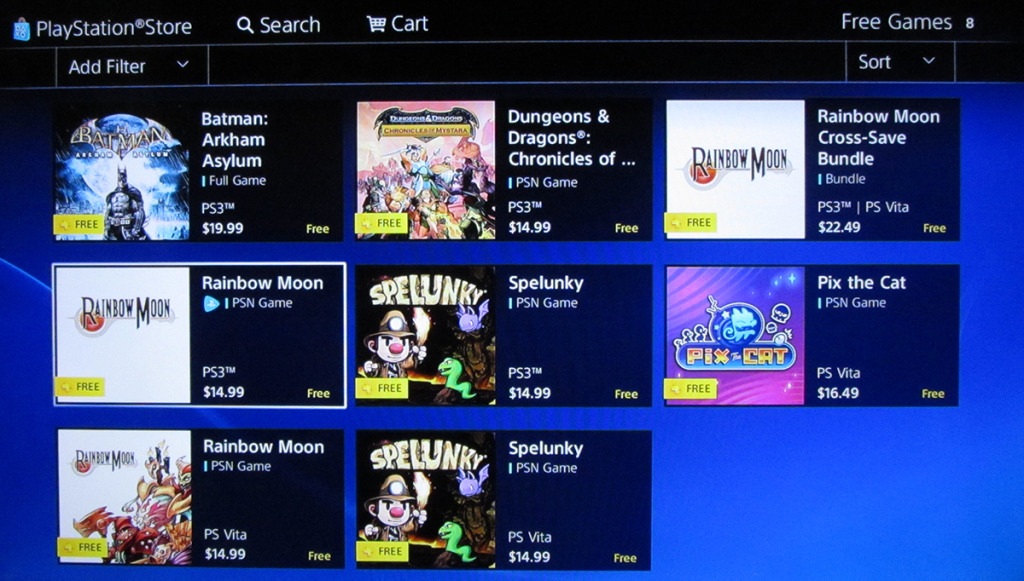 The PS3 game, then the PS Vita game and then a bundle of those together do not count as 3 games Sony…

The New Arrivals showed most of the same games as the Expiring Soon which confused things even further, and out of the handful of games that I could clearly see were part of PlayStation Plus, there were absolutely zero of which I would have any intention of ever playing, even under the direst of circumstances (I’d rather read the dictionary instead).

The fact that the store is, in general, incredibly slow to render and load, and the fact that it’s so frustratingly organized is one thing. But then to offer a “service” that’s supposed to give you benefits that someone must have worked very hard to conceal is the cherry on top of the crapcake.

I honestly don’t understand how PlayStation makes ANY money off of the PlayStation Plus options.

After finally giving up on any hope or desire to actually spend money on PS+, I decided to take one last look at the regular store page before chucking the whole system in the garbage.

Although the regular store is more user-friendly in the sense that actual games are listed and relatively easily viewable, most of the games offered are questionable titles such as Arcana Heart 3: LOVE MAX!!!!! (don’t forget the 5 exclamation marks…) for the low, low price of $39.99 and inviZimals: The Lost Kingdom ($29.99).

Don’t get me wrong. I think it’s great that Sony offers the PlayStation Store and that PlayStation Plus is an option. But I fail to see how loading a GAMING CONSOLE’s store with a neverending list of NOT GAMES instead of entertaining, enjoyable games that people might actually want to play (and pay for) makes any logical sense. The fact that it’s incredibly counter-intuitive and frustrating to navigate through doesn’t exactly inspire me to spend my money, let alone even bother opening the damn thing again. I’m not even going to mention the two times the store crashed while on this venture because that would just be too easy at this point.

After this experience, I’ve gotta say it’s gonna be a while before I boot up the good ol’ PS3 again for anything. I’m going to go ahead and take my money back over to Steam where I can at least purchase a game without having an aneurysm.

13 thoughts on “PlayStation Plus makes me want to ragequit”