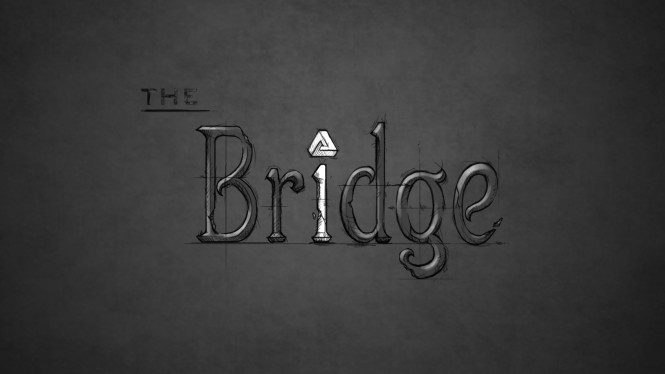 I recently finished playing The Bridge, an “M.C. Escher meets Isaac Newton” 2D puzzle game that tests the logic (and patience) of the player. It’s a game that I probably would have not come across if it hadn’t been sent to me as a gift from someone who knows my affinity for puzzle games. But it’s definitely one that fits the category and has a lot to offer any hardcore puzzle fan.

Created by Ty Taylor, with artwork by Mario Castañeda, The Bridge is simple and complex all at once. With basically no instruction, short of what controls are available, the game starts off with a man dozing underneath an apple tree. A tip of the hat to Sir Isaac Newton, the game doesn’t really begin until you figure out what the first puzzle is and how to solve it. Once you’ve got it, you can start to venture into the beautifully hand-drawn world of an M.C. Escher-inspired (and very talented) artist. 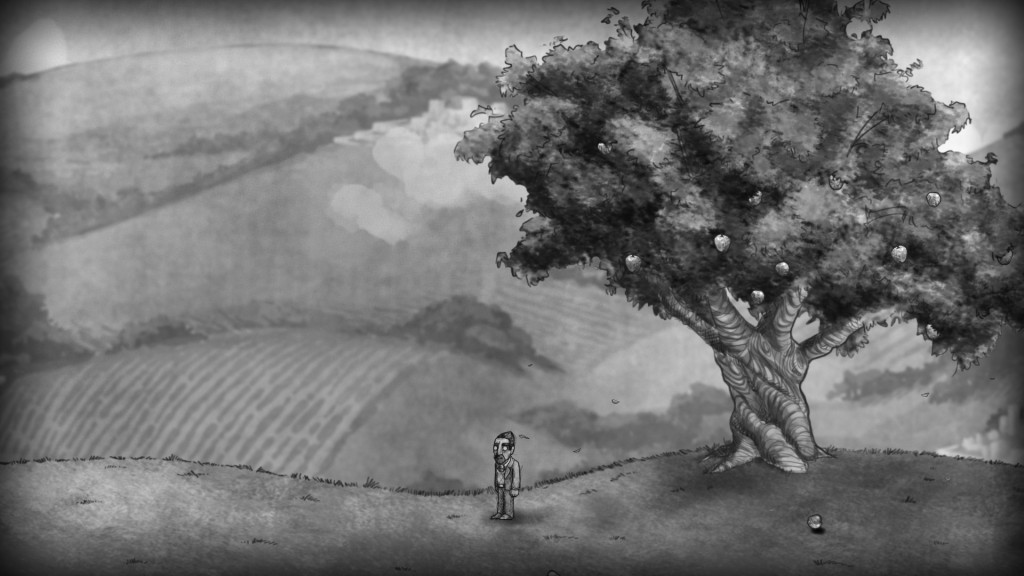 Just you and the apple tree.

The first few levels start off slowly, letting you get used to the mind-boggling game mechanics. Forget everything you know about physics because it’s not going to help you here. The game is both keyboard and controller supported. There are three basic actions. Left/right movement is one, going back in time is another, and rotating, or flipping, the world left/right is the last. 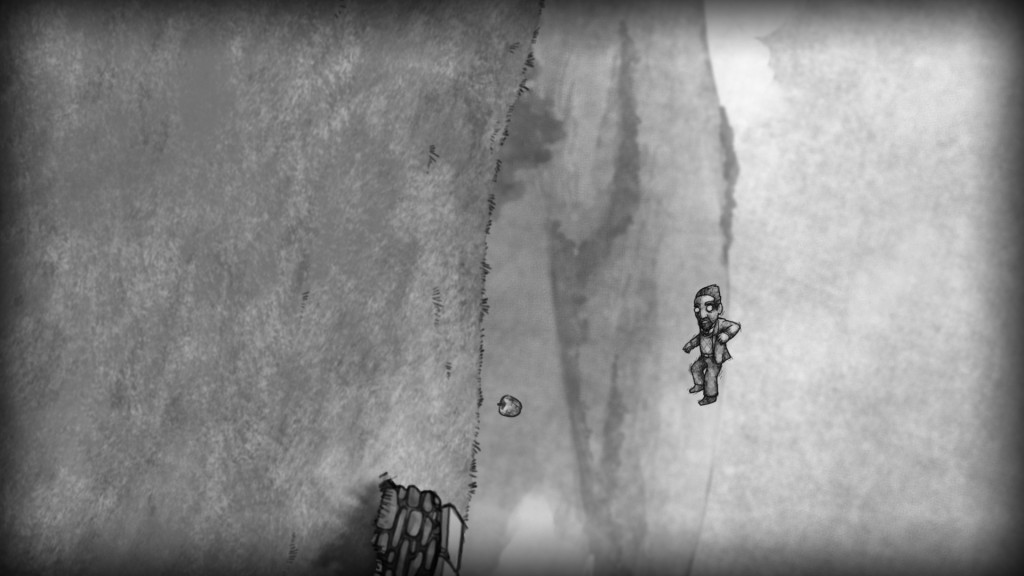 You won’t need physics for this game.

The rotation has an affect on your gravity in the world and flipping one way or another too far may cause you to fall off the structure all together. This means you have to have a delicate balance between timing and position in order to solve the puzzles.

After completing the first chapter of fairly simple levels, I was well on my way to being hooked. With a somewhat ominous backdrop and intensely philosophical quotes to darken the mood even more, you delve further down into the character’s own mind and, ultimately, madness. 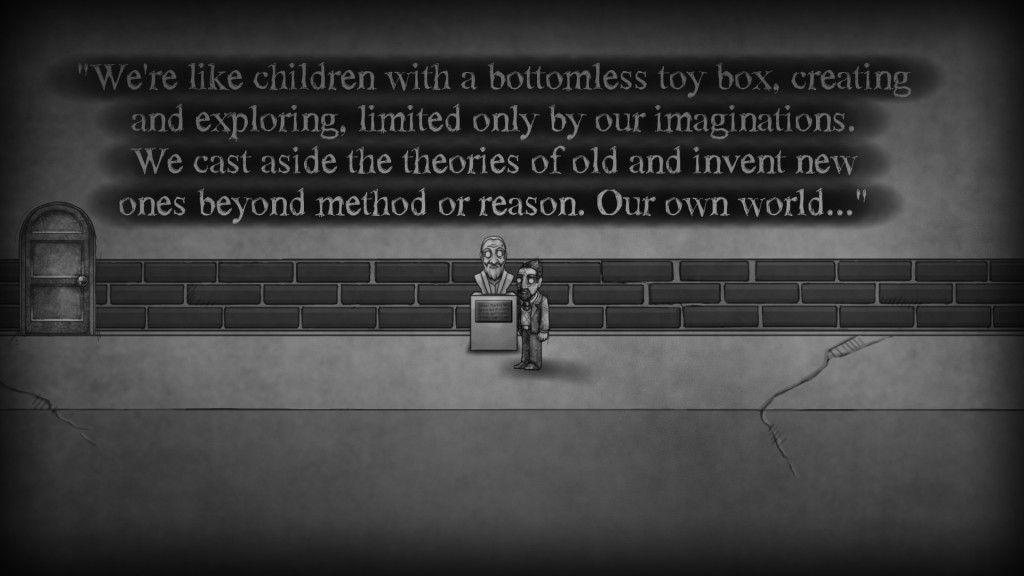 One of the many insightful quotes you will come across while venturing through this beautifully dark world.

The ability to manipulate both perspective and time gives each level its own difficulty and the addition of “menaces” and keys required to unlock the doors to escape brings even more obstacles. You need to get everything right in order to get free and the fact that you can never die in The Bridge means that I needed to put the controller down and walk away quite a few times before finally being able to solve some of the more difficult puzzles. Regardless of how many times I walked away though, something still kept me coming back for more.

The Bridge is truly an exercise of the mind and some of the levels are especially frustrating in the challenges they present. As I got further and further into the game, finishing the ever-complicating levels and chapters, I began to feel a sense of intense accomplishment. Being able to unlock the next chapter flooded me with joy and dread at the same time, not knowing what would await in the next few levels. 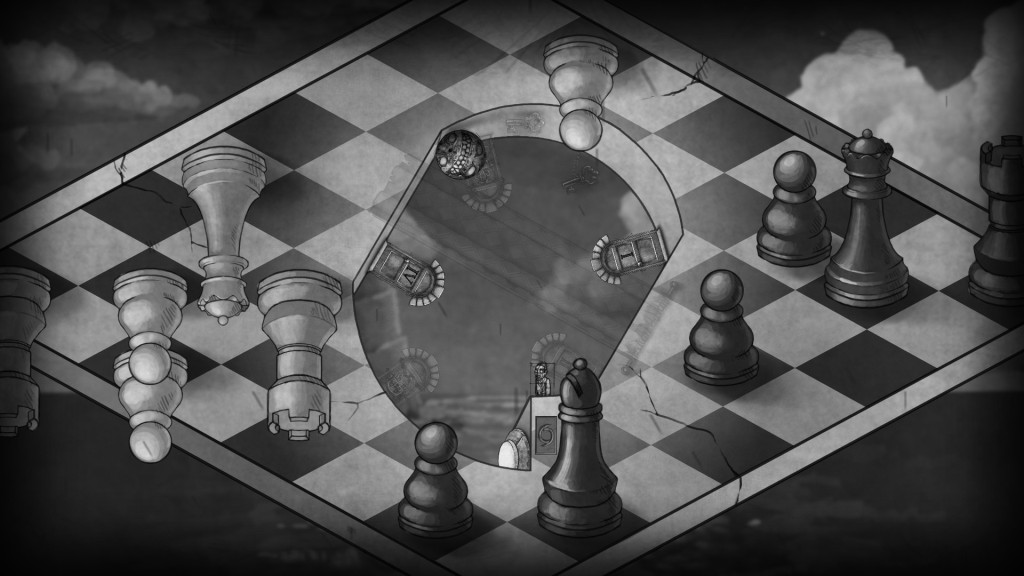 Every level is a new challenge.

Each new chapter introduces another element of gameplay, making the player have to relearn how to combine the old with the new in order to solve the puzzle. This keeps the game interesting at every turn and provides the player with a very entertaining, yet increasingly challenging game. The drive to complete the game in order to find out what’s at the end of the bridge is your motivation to carry on through even the most difficult levels, with small clues guiding you along the way.

After completing the initial four chapters (the first half of the game), The Bridge presents even more surprises with the introduction of the mirrored chapters. Once again increasing the difficulty of each level, you get to replay each chapter in a new, even darker and more difficult world where you and your “mirror” must solves the puzzles in unison. 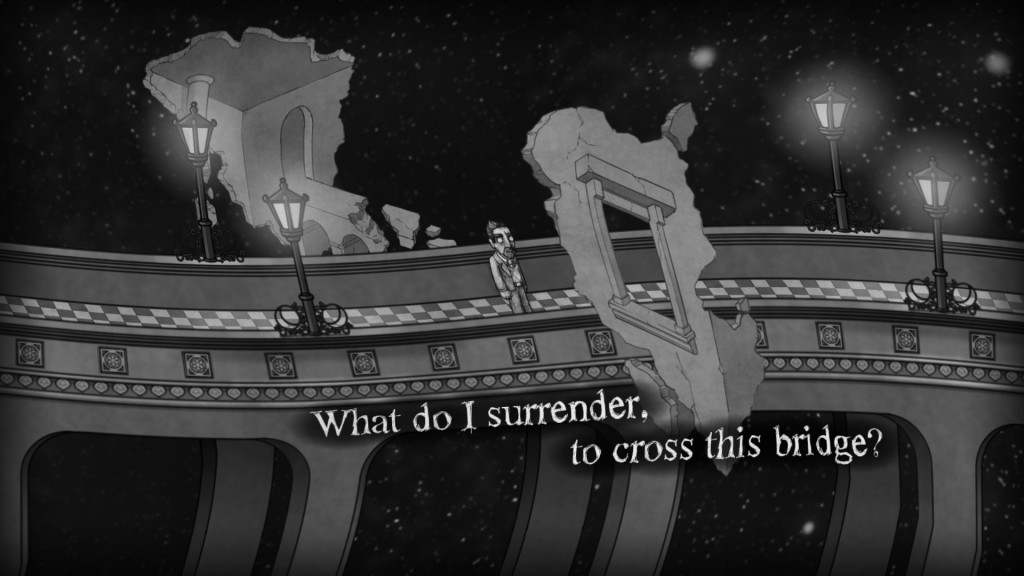 The story motivates you to persevere and get to the end.

The story, although quite minimal, is a sombre one and is enhanced by the black and white artwork, the impossible structures of levels, and the perplexing quotes and images interspersed in the chapters. And don’t even get me started on the music and sound effects. The game brings you into a dark, gloomy world through simple, crisp instrumental msuic contrasted with harsh, echo-ey sounds.

Although not necessarily fitting a conventional definition of “fun”, The Bridge offers players an enjoyable experience nonetheless.

The unique, hand-drawn art and the increasingly challenging levels made The Bridge fun to play and especially satisfactory to complete. It is a game that is both incredibly intelligent in design and immensely beautiful in its art. Its style is one that I haven’t come across in other puzzle games and it epitomizes the “games as an art form” genre that has become increasingly popular in the indie developer scene. 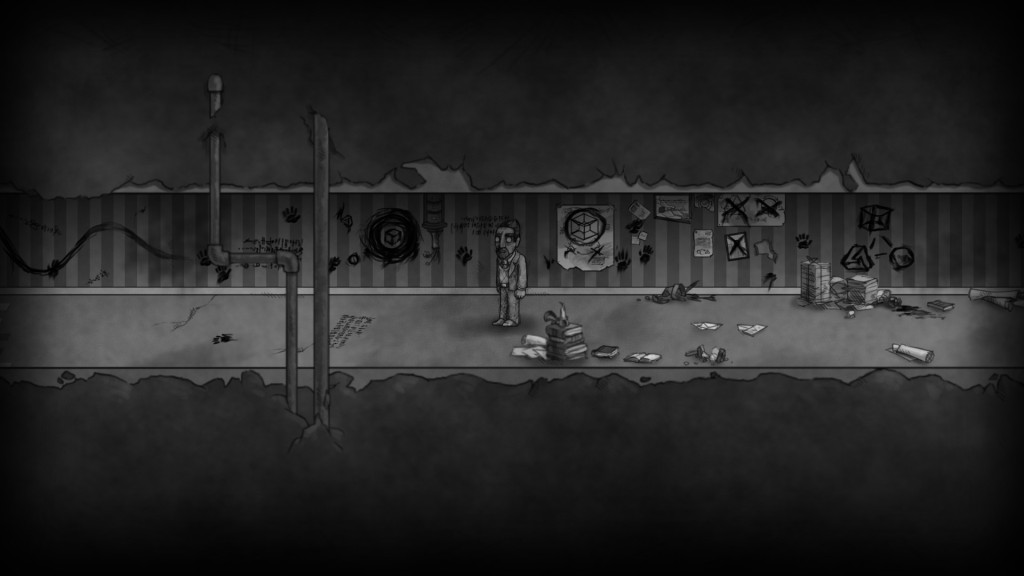 Dark scenes which help you immerse deeper into the game.

For me, it was a game that challenged, frustrated, surprised, and ultimately thoroughly satisfied me as both a gamer and a thinking being.

It appealed to me both visually and intellectually and its originality in design and art left a long-lasting impression in my mind. I can still picture the most epic of moments in the game and it will definitely go down in my book as one of the better puzzle games I’ve played.

At the end of the day, The Bridge is a game for those that don’t mind being stumped and have the patience to try a level time and time again until you get it just right. The satisfaction that completing each level, chapter, and, eventually, the whole game itself gave me was definitely worth the struggle. I will probably even go so far as to try to get the coveted 100% in achievements, although some of them seem impossible to me even now. 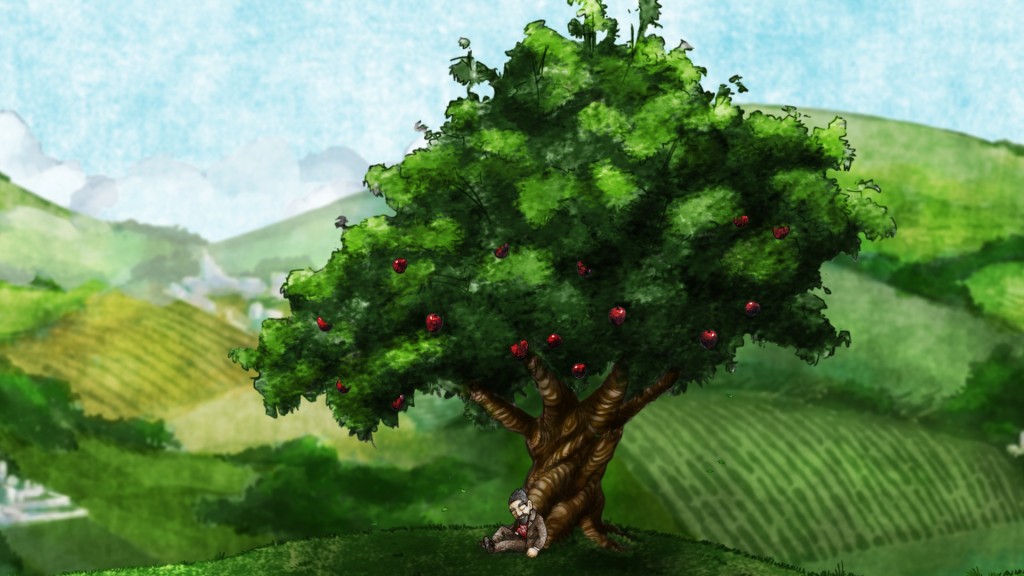 The Bridge is a beautiful and truly smart game.

If you’re looking for a great challenge that offers a great reward, be sure to pick up The Bridge.

Let me know what you thought of it in the comments below and if you’re interested in finding out how and why we review, check out our Let’s talk video game reviews article for a detailed account.