You may have heard of the relatively recent surge in video game streaming. While the numbers have grown, it’s still a somewhat “weird” concept that not a lot of people seem to get yet. So, how does streaming work and why should you care?

Let’s start with why people play video games in the first place. At the very root, you play video games as a form of entertainment. You hold the controller, or keyboard and mouse, and navigate your way through a digital world, solving puzzles, fighting bosses and gathering achievements.

You are in charge of the player you see on the screen and you have the power to manipulate the world you’re in by interacting with it. Immersing yourself in this digital world is usually a fun, challenging, and often very rewarding break from reality.

Now, not too long ago a new phenomenon started. Players began making videos of themselves playing games. This shouldn’t have come as a big surprise since YouTube is overflowing with random videos of all sorts of things, of which many never get any views. But here’s where it gets weird; these videos are immensely popular with many of them getting millions of views!

So, what makes these videos so appealing? Why would people want to watch someone else play a game?

A Let’s Play (often abbreviated to “LP”) is a series of screenshots or a recorded video documenting a playthrough of a video game, usually including commentary by the gamer.

I remember the first time I watched a Let’s Play series of one of my favourite games, the popular survival game, Minecraft. 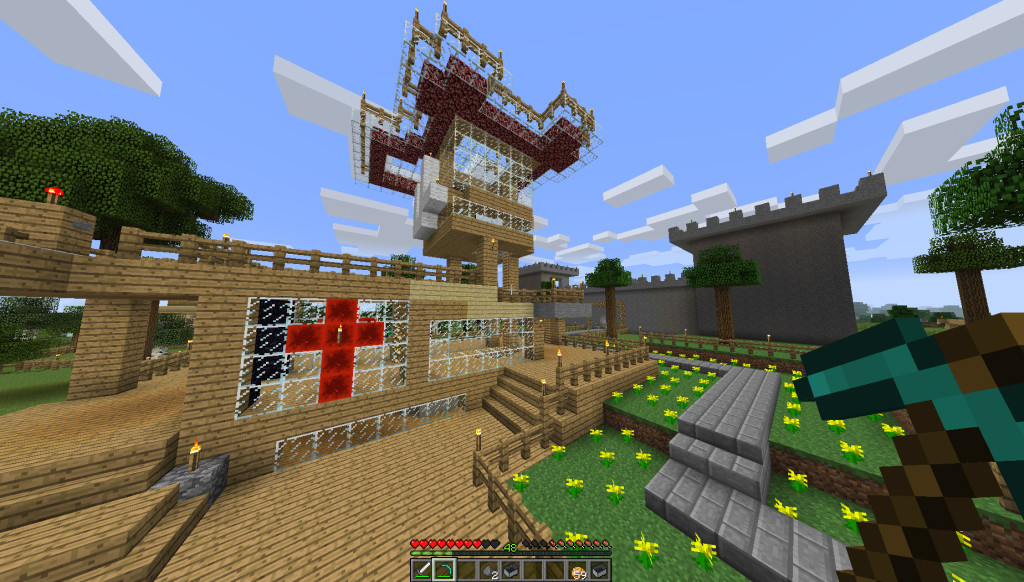 Minecraft is a great survival game which I recommend for everybody to play.

The narrator, a friendly-sounding guy, started out in a new world and began exploring. I was just sitting in my desk chair watching him cut down trees and dig up dirt and, while I could have easily started a new world myself, I preferred watching him build his first hideout, die by falling in a deep pit and try to run away from creepers. For some reason, there was something very appealing about seeing the game through someone else’s eyes.

One of the best things about watching someone else play is that you don’t have to invest the next few hours of your life playing the game yourself. You can simply go to a YouTube channel and know that for the next 15-20 minutes, you will be entertained.

It’s also a great way to scope out a game that you’re not sure you want to play yet. If you’re not enjoying an episode, you can simply skip to the next episode or watch a different Let’s Play series to check out other titles.

While YouTube used to be my number one source for watching other people play, I’ve been making the move to something a bit more interactive recently.

Now that we covered the well known method of recording, editing and then publishing the footage on Youtube, let’s look at how this has evolved into the live streaming phenomenon.

With live streaming, you cut out the editing and simply have a live recording going while you play. Essentially, you are still watching somebody play a video game, but there is definitely a difference between streaming it live or publishing it later to YouTube. 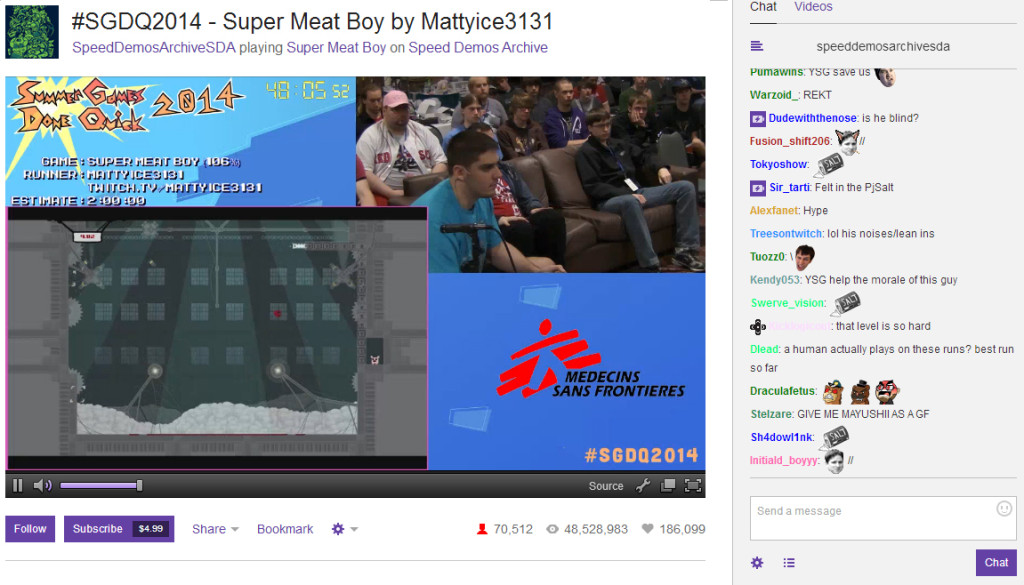 Over 70.000 people are watching a player do a speed run in Super Meat Boy.

The comments you see on YouTube are replaced by a live chat stream in which the viewers can comment on what they are seeing on the channel or interact with the actual player. It’s pretty much the same concept as people using Twitter to discuss their favourite TV show, but instead of using a hashtag, the interaction is happening right where people are watching. It’s part of the viewing experience.

The fact that it’s happening live and unedited makes for a more connected feeling to the streamer. It can create a community around a single stream, but I’ll get to that later. First, let’s talk about the biggest streaming service there is today.

I’m pretty sure you have heard the name Twitch going round. It’s a large streaming service which was created by the co-founders of Justin.tv and launched in June 2011. This young website focused on streaming video games and gaming tournaments.

At the beginning of 2014, Twitch claimed to have over 45 million viewers a month. That’s an impressive number, though the even bigger number in my opinion is the 1.5 hours the average user watches each day.

Now let’s get back to that community feeling and social interaction.

Community and interaction with everyone who is involved

The first things I ever watched on Twitch were some League Of Legends games. I was amazed by the viewer count on some of these channels and immediately noticed how much I enjoyed having a narrator giving a live commentary on the match.

The chat stream was filled with questions about the game and people’s reactions to certain events unfolding in the game. I could see people from all over the world discussing a great team fight or that awesome gank that really turned that lane around.

The player in question was actually answering people’s questions while he was playing “A lot of people seem to be telling me to get item X, but I want to build different for late game”.

It was amazing to see some real interaction going on between the player and his viewers as he was playing the game. This capability helps people feel involved and a sense of community forms as we all watch the same thing and talk about it as it’s happening.

Though this was child’s play compared to the giant social experiment that took place when the community began to play a popular game that brought all of us back to our childhood.

An anonymous Australian programmer set up this social experiment in which he let the users take over the controller. It was called Twitch Plays Pokemon.

People who were watching the stream could give commands through the chat window like “Up”, “Down”, “A” or “B”. The Pokemon game was running on a machine which did not have a single person playing the game, but instead, it used these chat commands as input for the controller. Essentially, thousands of people were playing the game at the same time which resulted in chaotic moments, but also success in the end. 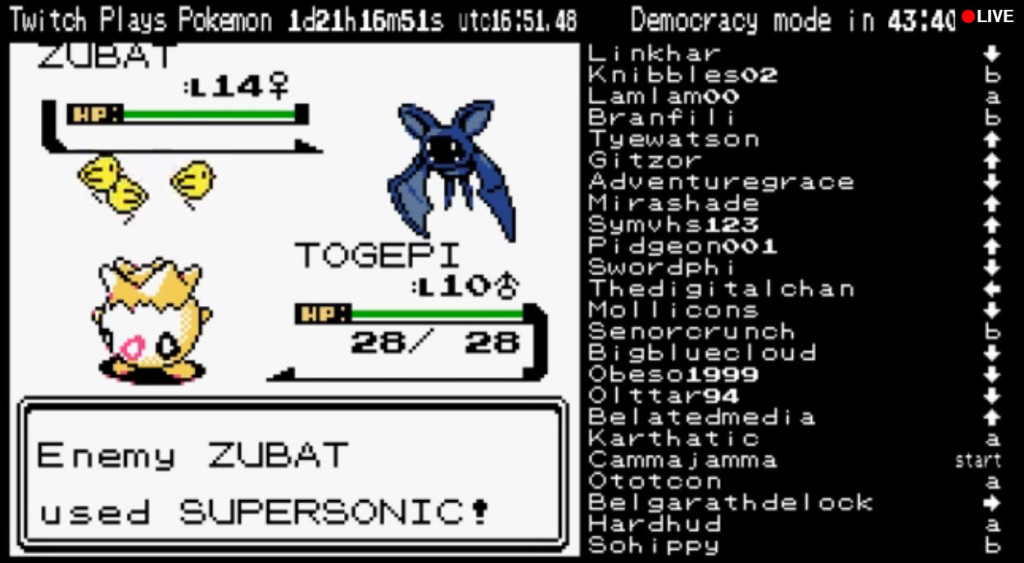 Thousands of people playing the same single player game together.

That was a whole new way to use the chat function which nobody really expected. In a more conventional way, viewers could use this feature to tell a player to make certain decisions in a game or show short cuts. This type of interaction makes people feel involved and so it’s no longer just one person playing that game, but the whole audience is included and there is a feeling of unity that is created.

This is something that you get only slightly through playing games yourself with friends or online with strangers, but it makes the appeal of watching someone else play a whole lot stronger. Yet, I feel like there are still a lot of negative comments surrounding Let’s Play videos and sharing your footage which should also be addressed.

I remember initially not understanding the Let’s Play series and it seems like a lot of people do not get it, or don’t want to get it for that matter. Let me deal with two of the most common arguments I have heard so far. 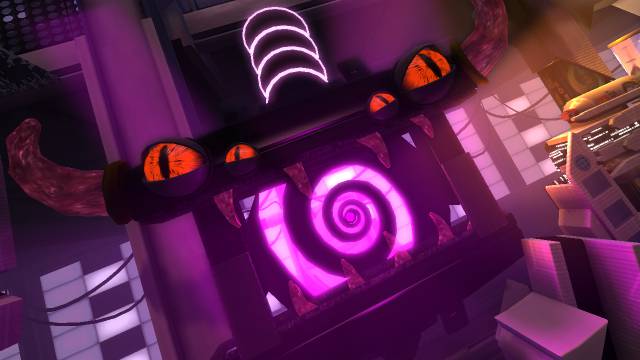 The Negativitron is the evil character in Little Big Planet 2.

Nay sayers argument #1: Why watch if you can play yourself?

Honestly, this was my first thoughts as well. I still think that in many cases, it is more fun to play the game yourself. But, while I’m eating my breakfast and I’m looking for easy entertainment in the meantime, I admit that I love watching a quick game of Dota. Often, I only watch until I finish my plate, though if it’s a good match I will watch the full 50+ minute stretch. It can be that good.

I recommend watching somebody play who is really good at the game. Seeing a speed run of a favourite platformer you used to play, and struggle with as a kid, can be a lot of fun to watch as an adult. The fact that somebody is really good at the game and can make plays and do things you didn’t even think were possible makes watching weirdly satisfying and nostalgic at the same time.

It’s not only the skilled part that comes into play. Watching other people play can also help with creativity.  After a few hundred hours, I found myself playing Minecraft with a lack of inspiration. I didn’t know what to build or what to achieve, but watching somebody else plan out a giant new hideout with crazy walls of lava definitely inspired me to go back and build some more.

Finding a player who is entertaining to watch, someone who makes you laugh and wonder what he or she will be up to next, may not always be easy to find, which brings me to the next popular argument.

Nay sayers argument #2: Most of the videos are crap anyway.

Absolutely, most of the videos are crap. Finding high quality and entertaining Let’s Play videos is the real challenge. Once you find them though, you have an infinite amount of entertainment ahead of you. Let me name some of my favorites.

These are just a handful of YouTubers that are worth checking out. The best strategy would be not to simply look up Let’s Play videos on YouTube, but to follow other people’s recommendations.

If you are leaning more towards the streaming side of things, you can browse Twitch by video game, so you can start off with a Super Mario World stream or another nostalgic title you haven’t touched in years.

Are you watching yet?

Hopefully by this point I managed to convince you to at least give watching others play a try. I’m not saying it will feel natural right from the start, but there is a lot of fun to be had and things to be learned once you give it a chance.

Who are your favorite YouTubers and streamers on Twitch? Let me know in the comments and I’ll add them to the article!